** this review has no major spoilers **

Like the previously-reviewed A Teacher, this makes good use of hi-def video as a (vaguely creepy) window into the troubled, naval-gazing lives of middle-class Americans.  In these clinical films, it's as if the characters are being observed by alien anthropologists.
A Horrible Way to Die is a horror film involving a serial killer, but much of it plays out as a downbeat drama.  I'm tempted to call the film misandrist, but I won't, because its view of women isn't exactly rosy, in fact it portrays a U.S. where malaise and personal dysfunction have reached apocalyptic levels. (I suspect the title applies not just to particular characters, but to a society or culture.)
I like the bit when an AA member talks about murders that happened to take place outside a bar, saying "nothing good ever comes from drinking," as if the victims had it coming.  A lack of community can be as deadly as any addiction.
The film is made by two up-and-comers in horror, director Adam Wingard and writer Simon Barrett, who've also collaborated on V/H/S and You're Next.  The film is boldly scored with deep, mournful strings.  The filmmakers also deserve credit for knowing to end the film once they've played their cards.
Posted by Thomas Lalli Foster at 12:28 PM No comments:

I've always liked science fiction, and I've noticed that many of the best s.f. narratives involve religion, including 2001: A Space Odyssey, Battlestar Galactica, and the works of Ursula K. LeGuin.  I think the reason this makes a good combination is that religion and science tend to be antithetical, in competition.  Just as religion has its prophets, science explores the future through science fiction.  The inclusion of its opposite injects dramatic tension into the science fiction genre, and prevents it from being sterile and abstract.

The reason I bring this up is because I find that many of the richest English-language films include themes of race and racism.  This makes sense, because the doctrine of white supremacy is stubbornly central to Anglo-American culture. That culture wants everyone to assimilate to its presumed superiority, and when someone can't or won't do so, it creates a dramatic tension that is difficult, if not impossible, to resolve.

For me, it's not so much that these films include racial themes as that all of the other films carefully exclude them.  Themes of race enrich works as varied as The Searchers, The Shining, Blade Runner, Jackie Brown, The Sopranos, and (again) Battlestar Galactica.

So you know where I'm coming from when I review this film noir, set in the 1940s, with the twist that the detective is a black man.  Denzel Washington, Jennifer Beals, Tom Sizemore, and Don Cheadle star in Carl Franklin's adaptation of the Walter Mosley novel, which sadly failed at the box office and thus left unfilmed the remainder of Mosley's Easy Rawlins books.  If you were a moviegoer in Fall 1995 and didn't go see this movie, shame on you (and me).

Devil in a Blue Dress gives us a black male hero in the late 1940s, without minimizing the racism such a man would confront.  This is a film that could've been made decades before if Hollywood existed in a bigotry-free zone; in that sense it's cousin to Far From Heaven, but peppier than that art-house entry.  This is an honest film, but it's also smooth, steamy, beautiful, bracing, jazzy and witty.

Aside from my recommendation, I'll only add that there's a very sexy scene in this film, one that deserves to be ranked with those in Body Heat, The Big Easy, and Out of Sight.

Posted by Thomas Lalli Foster at 1:29 PM No comments:

** this review is free of spoilers **

This Australian thriller begins with text that tells us that the populations of both humans and saltwater crocodiles are increasing in northern Australia.  We're also told the movie is based on a true story, which is fine, but it also works fine as a revenge-of-nature film.

This theme with a long history in Australia, going back at least to 1978's Long Weekend.  The revenge-of-nature subgenre could be seen as anti-Tarzan movies, and Black Water especially so, with characters clinging to tree limbs that are never more than a few meters above the still, opaque waters.
It's set almost entirely in a saltwater swamp, an alien environment for almost everyone on the planet.  This is stunning use of hi-def photography: watching this film, you feel like you're there, which in this case is vastly preferable to being there. 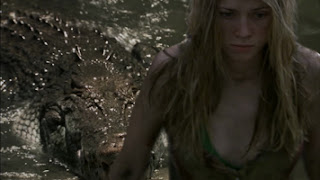 There's good acting here (though if you're not Australian, mate, you might be tempted to use the English subtitles), but this is not a character study: it's a nail-biting thriller about a group of people who suddenly, unexpectedly find themselves fighting for life.  It reminded me of two films: Jaws, and The Wages of Fear.  That's high praise, and I do think Black Water deserves more attention than it's gotten.  Even with the Ozy accents, if Hollywood still remembered how to market its product this film could've had a decent run in U.S. theatres.
Posted by Thomas Lalli Foster at 12:28 PM No comments:

** this review has no major spoilers **

In David Mamet's House of Games, Joe Mantegna's con-artist character explains that term: it's not that the "con artist" instills confidence, it's that he puts his confidence in you, and you feel honor-bound to reciprocate.  Granted this is a professional liar speaking, but he nevertheless has a point, one that helps explain how the protagonist of The Killer Inside Me stays out of jail.

This noirish crime film is an adaptation of the novel by Jim Thompson, previously filmed in 1976.  It flopped at the box office, but expect it to be a cult film in the future.  It will be loved and hated for the same reason: an unblinking look at psychopathic violence, so extreme that you don't know whether to laugh or cry -- or press "stop."  (By the way, that word is often misunderstood: a psychopath is someone who has no conscience but is able to pass as normal.  Norman Bates is a psychopath, so is Hannibal Lector; Tony Soprano is not, because everybody knows where he's coming from.)

Edit, 31 Jan. 2019: er, no.  According to Dr. Ramani Durvasula (YouTube interview), the difference is that psychopaths are born, not made, with sociopaths being the opposite.  Both are dangerous, but sociopaths are more likely to hold a steady job.  Thus, Norman, Tony and most comparable characters (including TKIM's) are implied sociopaths: we're given the genesis, to some degree.

As with I'll Sleep When I'm Dead, I was tempted to give up on TKIM, and if I'd been in a movie theater (remember those?) I may've walked out.  In both cases, the level of craft and conviction pulled me back to the narrative.
Posted by Thomas Lalli Foster at 1:45 PM No comments:

In the extras, actor Michael Ironside says that Christian Bale "did what he had to do" by losing 60 pounds, thus exposing his rib cage, for the title role in this film.  And I said back to the screen, "No, he didn't have to.  We all could have done without -- the movie's not that good."  This is not Raging Bull (for which Robert Deniro transformed himself, getting into fighting form and then getting fat for the epilogue).

Look, everybody wants to be a legend, and Christian Bale just might get there.  But no matter how impressive Bale's dedication, this is just a shaggy-dog parable, the type of story The Twilight Zone used to complete in 24 minutes but it takes 101 minutes of your precious time.  For me, it never escapes the shadows cast by any number of millennial strange-trips, including Dark City, Identity, and Bale's own American Psycho.
Posted by Thomas Lalli Foster at 8:49 AM No comments:

I think we can say that the bloom is off the rose for The X-Files.  It's so hard for popular celebrities, whether they be content creators or Sarah Palin, to keep it real instead of just drawing water from the same well.

I was never a regular viewer of the series, so I recently watched the best-reviewed episodes from Season 1, which is the only reason I know this second movie is a remake of the episode "Beyond the Sea": In both stories, a convicted felon claims to have psychic visions that can help solve certain missing-persons cases.  In both stories, we never find out for sure if he's telling the truth, or if his information comes from collaboration with (other) criminals, although Mulder, as always, "wants to believe."
"Beyond the Sea" is a riff on existentialism and doubt.  I've never been interested in philosophy or ontology, but the episode was OK.  The movie is a faithful remake, and since it's the same franchise: what's the point?  The first X-Files film was also more of a remake than a progression.

This film tries very, very hard for gravitas: instead of a murderer, the "psychic" in I Want to Believe  is a pedophile priest.; Dr. Scully is distracted by planning the treatment of a boy with cancer; Mulder and Scully are finally lovers, but drifting apart; and as always, Mulder is estranged from the F.B.I.
And you thought science fiction and horror couldn't be adult drama.

The one demographic that may welcome this film is middle-aged women who complain that men get to look "more distinguished" as they look older.  Gillian Anderson's looking good here, David Duchovny is downright haggard.
Time to cancel funding for the X-Files for good this time.

Posted by Thomas Lalli Foster at 11:14 AM No comments: