In a society based on assimilation, infiltrators need only learn language and behaviors, but terror unfulfilled eventually yields to laughter.  As the paranoid decade cracked a smile, Hollywood sci-fi enjoyed its first golden age: 1956's Forbidden Planet and Invasion of the Body Snatchers, 1957's The Incredible Shrinking Man, and 1958's The Blob, The Fly, and I Married a Monster From Outer Space.

Roger Corman's original version of Not of This Earth (1957) is overtly comic.  Like so many in midcentury, an alien vampire is drawn to Southern California, where his predatory habits escape the notice of suburbanites working their own angles.  These include teens, with their insistent slang, a new phenomenon meriting notice.  Charles Griffith and Mark Hanna's script is witty and inventive, yielding a hybrid of The Outer Limits ("The Duplicate Man," maybe) and Mad Magazine.

Setting the tone for a subgenre (Planet of the Vampires, Lifeforce), the space-vampire (Paul Birch) has the power to cloud men's minds.  Passing as businessman "Paul Johnson," his first meals are easy: a 40ish blood-bank doctor, a door-to-door vacuum cleaner salesman (Dick Miller).  As paperbacks and magazines then warned, aging and/or white collar men are at risk for dehumanization.  This is America, so stalwart resistance comes from the humble margins: a free-spirit chaffeur (Jonathan Haze), a motorcycle cop and his love interest, nurse-with-moxie Nadine Storey (Beverly Garland).

Garland was a pistol, and she's the droll center of Not of This Earth.  Ephraim Katz's The Film Encyclopedia notes a career "hampered by frequent confrontations with producers and the press."  Collating with her persona: she had a backbone before fashionable.  Garland is more alive than anyone else in the film (there's a pall over Johnson), and credible as alien-fighter: a well-turned blonde is expert around predators.

Beauty also sparks humor, like an anthropomorphized road runner chased by a coyote.  Perhaps the only thing worse than an old man's advances is one, as here, who refrains completely.  As Paul's private-duty nurse, Nadine's task is merely "seeing to it I do not expire."  (He always talks that way.)

Old-weird-Johnson is from the troubled planet Davanna; like the ottoman Dick Van Dyke tripped over, "divan" suggests a xenophobia of objects.  As in The Invaders a decade later, these aliens are collectivists, as they literalize pejoratives: anemic, bloodless, dead-eyed, death-warmed-over.  Their quasi-vampirism has scientific causes, as in I Am Legend (published 1954).  Finally, like the Vidians of Star Trek: Voyager, the Davannans sacrifice others to survive disease.

Johnson's mission is evaluating humans for "pasturing," i.e. as livestock (compare Daybreakers), with transport to Davanna, evidently, through a mirror, frame festooned with ping-pong balls.  Enthralled, Nadine is set as the beta-test, but the hero cop runs Johnson into a ravine and fiery death.  The tag teases a never-made sequel.  This low-budget lark was cheaply remade in 1988 (with slinky Traci Lords) and 1995 (Elizabeth Barondes and Michael York).  It's past time for another.

Posted by Thomas Lalli Foster at 6:53 AM No comments:

I see good and bad here, much of it stemming from Martin Scorsese's status as Hollywood elder.  The bad news: at the end, candles are placed on the dead after the draft riots, so survivors can identify loved ones.  The problem: the scene is lit such that candles wouldn't be necessary (on the DVD).  Judging from Scorsese's progressively impersonal output, he's lost the will to defy industry SOP.  Gangs of New York mostly ignores the overcrowding, debilitation, vermin and stench that prevailed in slums of the era (if not today's). 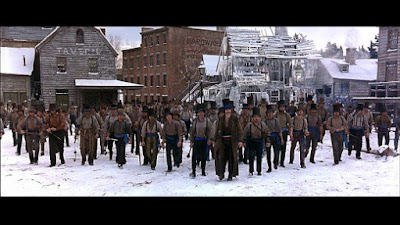 At the same time, Scorsese had the pull to deliver a star-filled epic about an historical period usually avoided (even so, the film was shot in Rome, with both Scorsese and Leonardo DiCaprio reportedly taking reduced salaries).  The ethnic and regional divisions of the 19th century remain, thus the appeal of the Western, which skirts the issues, and Civil War films that flirt with "Lost Cause" Confederate nostalgia.

While it may simplify local history,
Gangs of New York implies a disturbing truth: at one time in America, white supremacy was inclusive, it was multiculturalism.  (The film gestures anti-racism, but partly for our sensibilities.)

Divisions between Euro-American groups threatened to tear New York City -- tear the nation -- apart.  The U.S. stayed united by exalting whiteness (as do Lost Cause movies).  Of course, American racism held other benefits, especially free or cheap labor.  Today, white supremacy as national identity seems pathological, like losing weight by smoking cigarettes.  Still, it's our history, its legacy unresolved.
Posted by Thomas Lalli Foster at 8:04 AM No comments:

I've always heard this was a stinker, but as a sci-fi fan couldn't help car-wreck curiosity.  Red Planet is one of those movies so poorly sewn together, the subtext is evident while watching, as if the screenwriters did a nude scene.

Red Planet is a "deal movie," crossed with a feminist take on white males as the problem-population-at-millennium.  The movie opens with clunky narration from mission leader Carrie-Anne Moss -- who is she talking to? -- sound techs should avoid cosmic echo when the actor speaks colloquially, as in "we were kidding ourselves" and "gonna."

It seems Earth is dying of pollution etc., so a motley crew goes to Mars to check on automated terraforming.  Behind the green veil, the movie is an overlong, indecisive PSA on sexual harassment.  Tom Sizemore jokes about being king of Mars and making Moss queen, his repartee landing like a boulder.  Then again, confining five men with the statuesque Moss is a moral hazard.  Val Kilmer corners her as she exits the shower, then fails to pull the trigger; later, facing mortality, he says (by radio) he should've kissed her, and she quietly agrees.  No wonder the human race is dying.

[Edit, 11 Nov. 2017: Apparently, I was onto something.  The script's coy confusion reflects the hypocrisy of a culture that accepts sexual harassment and rape.]

The five guys are shipwrecked on the ginger orb, soon to be stalked by AMEE (pronounced "Amy"), a homicidal robot evoking the days of The Black Hole and Saturn 3 for viewers of a certain age.  On the mothership, as it were, Ms. Moss spends much of the movie thinking her misbehaving boys are dead, and increasingly, she's correct.  Terence Stamp (as a scientist, nevertheless spiritual) is the first to cash his check.  Future Mentalist Simon Baker, a weasel here, responds to feelings of inadequacy by knocking Benjamin Bratt off a cliff.  Later, Baker's character himself succumbs to guilt-related misadventure.

I mentioned it's a deal movie: Red Planet seems to originate in an alternate universe where  Hollywood is autocratic socialist state.  In alt-Hollywood, no one wants to work with Val Kilmer or Tom Sizemore, but as Party Members they're entitled to stardom until retirement.  Thus, this perfunctory (Red-themed) sci-fi with younger stars paying dues, and a Brit (Stamp) playing Latin for global buzz.

Sizemore is supposed to be the scientist blind-to-the-dangers, so he gets killed, when a new lifeform uses his body as a hatchery.  Unfortunately, Kilmer's character survives the end of the film.  Mars now has oxygen, but it's infested with carnivorous CGI locusts, which means someone was readying Red Planet 2.

Fortunately, there are better films set on the fourth planet, including Robinson Crusoe on Mars and The Last Days on Mars.  Even Mission to Mars (also from 2000) is watchable.  (I haven't yet seen John Carter or The Martian.)
Posted by Thomas Lalli Foster at 4:06 AM No comments:

I watched this expecting "In the Company of Women," but it lacks the scandalous energy that made Neil LaBute's debut worth watching.  The two leads are good, but the characters cliche (actually, they describe each other as such).  Stockard Channing is Julie, a veteran exec who's had to eat (extra) shit in a man's world.  Recently promoted to CEO, her personal life's a desert.  On a business trip she bonds with young counterpart Paula (Julia Stiles), an underemployed cynic who messes with people, compulsively.


The third character is a plot device: a handsome headhunter (Fred Weller, star of LaBute's The Shape of Things) hired by Julie.  Paula tells Julie that in college, he date-raped her friend (in a later version, Paula herself).  Over drinks, the vengeful women roofie the man, then leave him half-naked in a deserted area of the hotel, slurs marking his body.  The ironic sting: on waking he's bemused, and assumes a wild night.

In the Company of Men sustained interest with gratuitously cruel behavior, and reappraisal of who's been damaged, but The Business of Strangers teases wild behavior that's more of a postmodern prank. A twist ending indicates the rape never happened, further obscuring the point: is it that capitalism destroys ethics? -- age before gender? -- hotels need better security?

Or perhaps triviality itself: that in a male-dominated (pop) culture, the actions of women diminish.  Maybe so, but as presented here it's thin and stagey for a feature film.  Writer-director Patrick Stettner made just one subsequent feature, The Night Listener (2006).

Posted by Thomas Lalli Foster at 4:17 PM No comments: