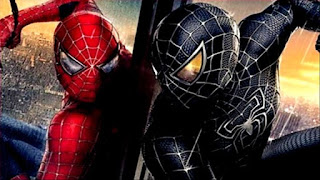 I've never been a superhero fan, but then how much do you need to know: he's Spider-Man, he swings from buildings, saves damsels, beats up bad guys.  Does whatever a spider can -- except repulse women.  (And that helps us understand why he's a role model to nerds.)

In this episode: Peter takes Mary Jane to Central Park, spinning a web so they can lie suspended and look up at the stars, just like young men in love have done for ages after being bitten by a radioactive spider.  You know this can't last, and sure enough, some black goo crawls off a just-landed meteorite and makes its way to Peter, who becomes the superhero equivalent of Jerry Lewis's lothario persona in The Nutty Professor (this represents Peter's already inflated ego: he can't muster empathy when Mary Jane gets her first negative review, then gets canned from her Broadway gig).

This installment's middle-aged supervillain (cinema supervillains are always old enough to be the superhero's Dad) is Thomas Haden Church as the Sandman, who can hide easily because, well, he turns into sand.  This allows some impressive effects scenes.  I expected some kind of redemption for Sandman, whose life of crime started with a need for money for his sick daughter, but the movie seems to lose interest.  There may be a parallel with Obamacare.

Eventually, Spidey reconciles with his frenemy Harry, a.k.a. Green Goblin (James Franco), and together they defeat the bad guys, including sleazy photog Eddie (Topher Grace), who's been zapped by the black goo and is having a great time being his own dark side, a.k.a. Venom.  There's a nice little message to the effect that you always have a choice in life, meteorite or no meteorite.

This is the last Tobey Maguire Spider-Man, and feels like a lark.  With Maguire, Topher Grace, and James Franco, this movie really had its eye on young females, especially the ones who like slight, non-threatening white guys.  As for me, I hope to finally remember that Maguire and Jake Gyllenhaal are two different people.

Posted by Thomas Lalli Foster at 4:01 PM No comments: