** this review contains only minor spoilers **

I liked this better than the original, but I deserve cinephile credit: I saw [REC] first.  That film came out in 2007, Spain's entry in the viral-horror pandemic.  It's a good film, but some of the dark humor seemed to get lost in translation.  Also, [REC] involves Satanism, whereas the remake is more secular, if far from divine.

I believe that most horror films include a behavior that draws punishment on a moral level, even if it seems to be peripheral.  For example: in Night of the Living Dead, Johnny clowns in the cemetery, a sacred place (I believe it's a Sunday, which makes it worse).  In the world of the film and in the viewer's subconscious, the zombie mayhem is punishment for a world that has forgotten respect.  Johnny is the first to die.


In Quarantine, the trigger is a little tougher to spot, because the protagonists are an impressive group of people: a perky TV-show host (Jennifer Morrison), her loyal cameraman, and a group of firemen, the subject of the show.  In the U.S., any city's firemen are known as that town's bravest; for example, Boston's firefighters are "Boston's bravest."

Of course, this is essentially true anywhere: we admire firefighters and other first responders.  In both [REC] and Quarantine, the heroic characters discover and interact with a group of variously reclusive, self-involved people.  Instead of a wealth gap, these movies portray an enormous socialization gap, an abyss. 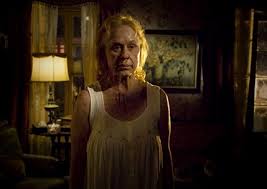 Posted by Thomas Lalli Foster at 4:50 PM No comments:

After various iterations of The Ring, The Grudge, and One Missed Call, we may assume filmmakers have exhausted the fright potential of running water and long-haired females.  Still, I’d also recommend Dark Water, a literary horror flick that sets the freaky water effects against domestic tragedy.  (Note: Ring-master Hideo Nakata had a hand in Dark Water’s screenplay.)


Oscar-winner Jennifer Connelly plays the mom to a little girl, both trying to survive an acrimonious divorce from husband/dad Dougray Scott.  Connelly’s character falls through cracks and into a creepy (but affordable) high rise on ’s .  The Brutalist monstrosity is haunted (shocker), although Connelly worries as much about retaining custody.
(Connelly has quietly assembled a formidable sci-fi/horror resume, including The Rocketeer and Dark City, and collaborations with Dario Argento, The Hulk, and the neo-Klaatu.)

Despite moments of dread, Dark Water is relatively muffled compared to, say, The Ring or Session 9.  It seems to actually care about its characters, as opposed to something like The Grudge.  Child abuse is a theme, but the worst acts occur before the movie begins: the movie is about the grip of the past, and it's profoundly sad.  Both mother and daughter are achingly vulnerable, met mostly with greed and indifference, despite a sympathetic lawyer played by Tim Roth (other familiar faces: John C. Reilly, Camryn Manheim, and Pete Postlewaite).


The cliché is that most of us are “one paycheck away” from disaster.  Dark Water is social horror, dramatizing the companion truth that for many women a messy break-up has the same result.  Credit for this mix of fright and empathy is shared by Brazilian director Walter Salles (The Motorcycle Diaries) and the makers of the original Japanese film, which was based on the novel by Koji Suzuki.

Posted by Thomas Lalli Foster at 4:28 PM No comments: