** this reviews contains moderate spoilers, but no major ones ** 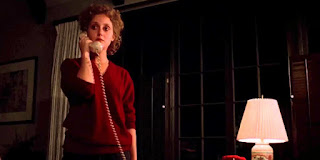 I'd never seen this film; sometimes I mistakenly think of it as a TV-movie, because in line with the previous When Michael Calls (1972) and Are You in the House Alone?! (1978).  Actually, it's both cinematic and too raw to have been shown on TV at the time.  (I have seen neither the 1993 sequel nor the 2006 remake.)

The rap on When a Stranger Calls (1979): the first 15 minutes are much better than the rest of the movie (Wes Craven apparently liked the scene; Scream opens similarly).  I didn't respond that way.  Although I already knew the (now-famous) reveal, the entire film held me, offering style, strong characterization and a level of tension.

The story's apparent digression, with the villain stalking an older woman, is actually essential, because it shows how damaged people affect others even if (or when) they aren't violent.  Colleen Dewhurst is part of an outstanding cast that also includes Carol Kane and Charles Durning.  Note that Dewhurst is almost as leery of private-eye Durning as she is around the creep: an older woman on her own, she has a weary deftness with risk.  (As in many movies of the era, Durning's quest obliquely echoes that of The Searchers.)

An atomized society can't adjust to people who are randomly homicidal, or even bent on hurting others from a distance.  Like so many horror villains, Curt Duncan takes advantage of modern anonymity -- "privacy" -- after escaping from lockup.  When his social idiocy provokes a beating, it barely slows him down; clearly, he's used to being victimized.  He can't cope with other human beings but goes through the motions of trying, for reasons of self-justification.  (British actor Tony Beckley makes an impression in his final film; he died the next year, at 52.)

That name is striking: "curt dunkin'" implies a perfunctory, weak religion.  The German first-name is especially noticeable in that Carol Kane is clearly Jewish, regardless of her character name (why not say so?).

Initially, Durning goes after Duncan with some kind of poisonous needles (call it a citizens' lethal injection), presumably to avoid a murder charge.  The needles are almost comically ineffective, another symbol of a society grown arthritic from its exhausting battle between arrogance and self-doubt.
Posted by Thomas Lalli Foster at 7:45 AM No comments: