Director-writer Fabrice du Welz is better known for Calvaire, which I haven't seen, but I'm certain it's better than Vinyan.

This movie plays like a combination of Don't Look Now and Lord of the Flies, but isn't as interesting as that sounds.  It's a slow burn that never goes much of anywhere, except to show how the loss of a child can be financially ruinous as well as grievous.

Vinyan contains horror elements, namely some hallucinatory shots of wretched orphans of the 2004 tsunami.  It plays more like a drama, but there's little tension: it starts with misery and grief and goes down from there.  It's a pretty-looking wallow in a quagmire.  Emmanuelle Beart remains very easy on the eyes, and some will say the same of Rufus Sewell.   The film is set and filmed in Southeast Asia, in gray and green tones, and the plot gives nods to Apocalypse Now (or at least Tropic Thunder).
Posted by Thomas Lalli Foster at 5:16 PM No comments:


The usual group of young people voluntarily isolate themselves, the better to be victimized by whatever lurks in the shadows, in this case a battalion of Nazis-turned-zombies.  This Norwegian film is self-aware and tongue-in-cheek, and there are a few funny moments, but the movie is basically a platform for the makeup, costumes (the Nazis had an undeniable flair for the visual), and gore gags.  All of this is moderately impressive for young filmmakers, but the whole thing has a late-to-the-party feeling; there's little here that wasn't done for The Evil Dead several decades ago. 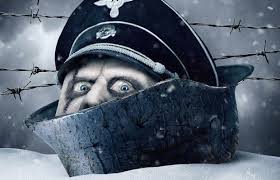 There's a striking scene in which a middle-aged hiker smokes a cigarette while dressing down the youngsters, explaining they have no idea the horrors that exist in this world.  Otherwise, however, the film has nothing much to say about Nazis or how to combat them.  The film is about Nazi zombies simply because there had not yet been a (good) Nazi zombie movie.

EDIT 18 August 2015: After writing, I realized the above is incorrect.  The lone survivor  (final boy?), Martin, realizes the Nazis want their stolen loot returned, however runs into more trouble because he forgot the recovered coin in his pocket.  This represents the way white people tend to benefit from, and be tainted by, the legacy of bigotry and imperialism, even if we're neither directly involved nor aware of it: we're against oppression, but we're carrying the profits in our pockets.  The name may be a reference to high-ranking Nazi Martin Bormann.

Posted by Thomas Lalli Foster at 4:50 PM No comments: