In this film, the Coen brothers are saying that the "birth of the nation" wasn't the reversal of Reconstruction, as in the D.W. Griffith film, but the New Deal of the 1930s.  That this is a story of national origin is signaled by its recapitulation of Homer's The Odyssey, revised as the story of three fugitives from a Southern prison work-gang.  The film also draws from a younger classic, Sullivan's Travels.  Although the Coens agree with Preston Sturges that movies should entertain, to give us relief from our toils and sorrows, O Brother admits movies have become our national literature, the source and mirror of our values.

And if we feel our U.S. culture is less magical than old Hellas, we need to look again, as at the haunting scene of supplicants going down to the river.  If you're not sure you believe, well just hang on, and something will turn up -- a hand cart driven by a blind man, a talent scout, a flood -- to change your luck.

The New Deal of the 1930s was a key part of the rise of the Federal government as the seat of power in the U.S. (note that Americans used to say "these United States are," now we say "the U.S. is").  Thereafter, it was harder for local or regional authorities to abuse prisoners or otherwise deny human rights.  The planned flood, referenced throughout the film and seen at the end, is a baptism for this new nation.

One unforgettable bit has Everett (George Clooney) repeatedly frustrated by his inability to secure his preferred brand of "pomade" (hair-grease).  It's hilarious, but even here, he's urging his countrymen to a higher standard.  The Coen brothers are known for inventive, off-the-wall humor, but may be unique in their ability to smoothly insert an extended visit with the KKK into a whimsical comedy.

In summation, good people, since the days of the New Deal (with its many dams), we're closer to our stated ideals about everyone having a chance to pursue happiness, etc., whether ethnic minority or ex-convicts.  The down side is that major corporations now call the shots, and regional cultures tend to be discouraged, unless expressed through the arts, such as music (cue The Soggy Bottom Boys).
Posted by Thomas Lalli Foster at 9:32 AM No comments:

** Spaceballs spoils itself, when the characters fast-forward a VHS of their own movie! **

Considering the amount of mockery it inspires, sci-fi hasn't been a fertile field for movie parodies.  In the parody golden-age of the 1970s and 1980s, both Young Frankenstein and The Man With Two Brains favor horror over sci-fi.  Woody Allen's Sleeper was derived from prose science fiction, thus its plot twists are more sophisticated than most serious s.f. films of the era.

Dark Star (1974) remained sufficiently obscure as to be reworked, just a few years later, as the terrifying Alien.*  Ghostbusters, Back to the Future, Tremors, and Coneheads were sci-fi comedies, despite containing moments of parody.  Mars Attacks! went splat.  Only in 1999, with Galaxy Quest, was the genre successfully spoofed in a theatrical, English-language movie.

Many questioned the timing of Spaceballs, a full ten years after the release of Star Wars (or A New Hope, if you insist).  It's more to the point to note that Mel Brooks left science fiction till last amongst his genre parodies, evidently because he had no particular understanding or affection for the genre.  If you look at Brooks's best films, all spoof the pre-1950 movies he saw as a child, with the partial exception of his Hitchcock riff High Anxiety.  By 1987, he was also well past his prime, witness his remaining spoofs going downhill from the title:  Robin Hood: Men in Tights and Dracula: Dead and Loving It.

Mainly, Brooks understood that sci-fi and outer space were wildly successful, so we get lots of jokes about merchandising, home video, and sequels.  These don't parody sci-fi so much as 1980s Hollywood, and a space-mad society.  An exception, and one of the film's better jokes, comes when a starship commander orders the ship to "ludicrous speed," which mocks the blithe manner sci-fi throws around made-up terms like "warp speed" and "hyperspace."  (As indicated by the recent Nolan brothers film, many scientists believe interstellar travel is practically impossible.)

Science fiction is rich for parody, of course, in its moralizing (how is it that every alien race reminds us of social problems on present-day Earth?), its Statue-of-Liberty reveals, and its recycling of adventure movies in the future, but Spaceballs mostly ignores these areas.  Instead, we get endless puns, most of them weak: a dog-man named "Woof," a "Druish princess."  The whole thing is too jokey: most of the gags would work as well on the radio.

I'll admit Spaceballs offers some laughs, including the sight of stormtroopers "combing the desert" with giant combs.  The lack of CGI helps: it's funny that the production actually created giant combs marked "Ace/Genuine Hard Rubber." 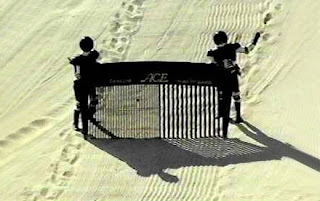