These Halloween posts accumulate more hits than the others combined (my thanks to all who've read).  It seems to have provided inspiration, resulting in enough text for (a planned) three posts, the last for All Soul's.
On usage: "underseen" can be contested, of course, but these titles merit attention amid a wealth of choices.

While more of an art film, and closer to didactic than Hammer’s usual line, Vampire Circus is typically sumptuous in evoking an indeterminate past.  It has a liquid quality, like stepping into a river.  It seduces the viewer, as Count Mitterhaus seduces Anna, and Emil, Rosa.

“a hundred delights!  the Circus of Nights!”


Vampire Circus caps the horrific-circus/carnival trend of midcentury: Shadow of a Doubt, Nightmare Alley, Circus of Horrors.  In being seasonal, on the edge of town, the Dark Carnival stands for a liminal threat, possibly genocide.  Of its title ruin, dialogue in Carnival of Souls says, "The law has placed it off-limits."  This pavilion is contrasted with what is "safe," "reasonable" and "seemly."  Shtettel (the spelling varies), the town in Vampire Circus, is Yiddish for “town.”

Another trope, with similar meaning, has survivors crossing paths with perpetrators, as in The Seventh Victim, Seven Men from Now, The Last House on the Left and Eden Lake.  Here, both terms apply to both groups, humans and vampires.

Vampire Circus is tough on Anglo-Americans, its trigger-sin crouched in our blind spot.  The townsfolk can be deceitful and waspish, but their damning trait is division.  They’ve had time: after the execution of bloodsucker Mitterhaus, 15 years pass before vengeance -- modernity descends -- as half the town decides vampires don’t exist. 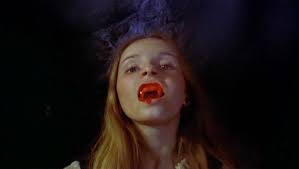 Early rationalists, Dr. Kersh and schoolteacher Mueller scoff at the notion of vampires.  The teacher is an intellectual feather: after losing his family and killing Mitterhaus, he reverts to scientism, but still can say of the circus folk, “they are death.”  Later, he redeems himself, by believing in what he can’t understand.

Divisions between men tend to leave a divided population.  Inevitably, an opposing residence becomes hostile territory, as couples and families assume entitlement to (toxic) privacy.  Parents become unaccountable, then suspect.  Thus, the revolutionary insight of Vampire Circus: estrangement from traditional religion as a cause of sexual frustration.

The town’s young adults also assume a type of rabies to be the only plague.  (Indeed, rabies may be the origin of vampire lore: science and folklore interrelate, despite attempts at segregation.)  Only as the skeptics recover faith (intellectual humility) can the town defend itself.  The humility should be in the context of a supernatural: it's too easy to own ignorance if never actually wrong.

Filmed narratives about demonic encroachment don't necessarily specify demons, e.g., Circle of Fear "Earth, Air, Fire and Water," Twin Peaks.  The horror films of John Carpenter assume a force of pure evil, malignant to humanity.  In both Prince of Darkness and Vampires, the Catholic Church is uneasy ally of the protagonists.  Carpenter is an atheist, but his movies at least flirt with the idea of the Church as hedge against something even worse.

Like Twin Peaks, Shtettel seems to have no church, and everyone’s lying to someone.  After her son is snatched from danger, the mayor’s wife kisses the rescuer, humiliating her husband.  A splinter group negotiates passage from the barricaded town, and is killed.  Dora, Mueller’s surviving daughter, is safely “in the city,” but journeys home unannounced and unescorted.  Rosa’s mother keeps her daughter’s secret, the affair with Emil.

Two boys sneak to the circus after hours, joining those snared by the hall of mirrors.  (If funhouse reflections are a door to evil, it questions my daily, four-hour gaze.)  These vampires are magicians and shapechangers, with an (unremarked) immunity to sunlight, and implied psychic powers (the film gets choppy late, reportedly from budget cuts).

Kersh slips the barricade but, unlike Ivy in The Village, gets revelation.  Now, unanimous belief in vampires gives the townsmen a fighting chance: "Without a vision [no plurality] the people perish."  Shtettel has the advantage of a common heritage, including a recent (cultural) memory of faith.  Still, those attempting “a new kind of nation” should gird for failure.

“If your wife’s in there, maybe she wanted to go.”

The ending, which is too busy, reveals the circus-leader to be a disguised Anna, even as she saves Dora.  Despite this partial redemption, Anna made the town a target, by placing personal desire above commitments to (original) family and tribe. 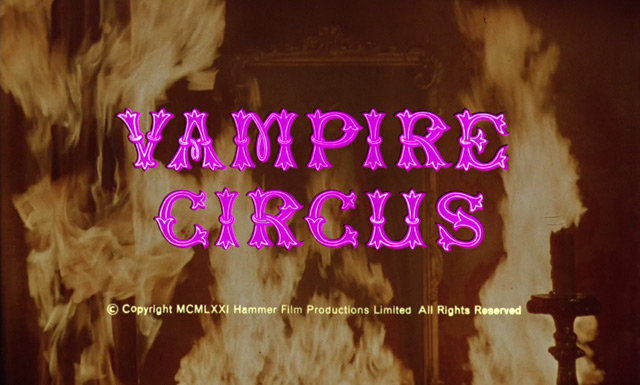