20th century history seemed to destabilize, with new technologies, mass migrations, and a range of time-limited phenomena from rock n’ roll to genocide.  Industrialization, effectively, made us test subjects.  The fluctuations called for nervous parody.
Larry Cohen, the late exploitation auteur, typically used high-concept as a stalking horse, building a provocative film around some scary-funny threat (e.g., revived Aztec god Q, addictive dessert The Stuff).  Recalling the shock of a baby’s tantrum, Cohen invented a movie-monster for the cocooning, post-Vietnam U.S.: homicidal infants.  Cradled in a Bernard Herrmann score, the blunt-headed metaphor remains morbidly funny (for some of us) half-a-century later.
The first and best of a trilogy, It’s Alive (1973) is the singular fertility narrative of Frank and Lorene Davis (the first-names evoke horror history).  Suburban and white, they’re habituated to television, prescription pills and cow’s milk — a motif, as when the Carnation man becomes prey — and live in California, where trends start.  Americans believe in “progress," and the new parents seem fairly indifferent to causes.  The smartly satiric horror film ends dropping-the-mic: “Another one’s been born in Seattle.”

While acknowledging the comic angle, It’s Alive centers on John P. Ryan’s titanic performance as Frank Davis, as he's betrayed by friends and fate.  Still, he can’t erase his issue.  His Job-like travails deliver twin themes for the franchise: Americans have become fatalistic; the parent-child bond is nearly unbreakable.  The themes mutually reinforce, e.g., repeated speculation the mutants have superior resistance to pollution, similar to the children in These Are the Damned.
The series is less interested in the babies than in society’s reactions.  As in Night of the Living Dead, most characters are comically quick-to-adjust.  As writer-director of the trilogy, Cohen favors canted-angle shots of figures darting here and there: the “normal” characters are as flighty and reflexive as the babies.  If the sequels are less nimble than the original, and repetitive, that might also be the point.
It Lives Again (1978) posits a hidden colony, for humane study.  Despite help from new dad Frederic Forrest, the rogue pediatricians are themselves too geriatric to manage their charges.  Meantime, the genetic shuffling seems to multiply, e.g., a birthday party where tykes crawl under low branches, and the birthday-girl looks like a  boy.  The location is a memorably cinematic hillside, symbol of the scramble for supremacy. 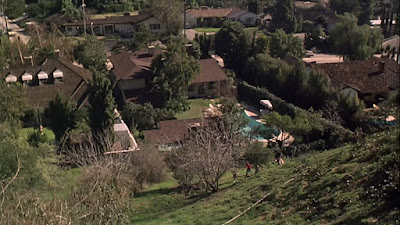 The babies are unnerving (models designed by Rick Baker), but the filmmakers never solved movement.  Granted, the babies do more in the third film, but in the commentaries, Cohen cites Val Lewton, in saying both sequels showed too much.  Tone was a challenge, too: the premise is inherently funny, but Cohen wanted monster movies, first, so each suspenseful scene has to be (a little) funny, and vice versa.  He masters tone for the first two, but the third unravels, perhaps from anxiety over the series' misanthropic overtones.
In the larkish It’s Alive III: Island of the Alive (1986), a new regime gives the babies an island to themselves.  Of course, these are babies, and the reparation is folly (compare A Clockwork Orange).  This time, the tragic dad is Steven Jarvis (Michael Moriarty, pre-Law and Order), a struggling actor with an antic sense of humor.  He takes to grandly introducing himself as “father of the monster.”
Disillusioned with community — the movie begins in church, courtroom and '80s comedy club — Jarvis signs on for an expedition to the baby-island (Hawaii locations).  It’s Alive III becomes a stoner comedy, as Jarvis loses any interest in the social contract: imagine Apocalypse Now if Willard (Martin Sheen) and the photojournalist (Dennis Hopper) were one person.
It’s Alive III isn’t the inspired lunacy of Cohen and Moriarty’s Q, but has its charms, as the latter sings sea shanties, threatens to defect, and muses on the babies’ telepathic potential.  The story defaults to an ending from midcentury space-invasions: an everyday element as deus ex machina.  Still, the viewer is free to imagine a next generation with stronger resistance. 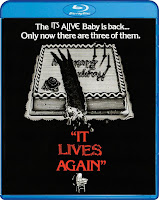 Nature gave "Larry's kids" a biting chance, whether or not in response to our behavior.  Pollution, abortion, and medication usage are only a few of the troubling associations.  Easier to miss: clawed and fanged babies are kin to Wolverine, Freddy Krueger, Ninja Turtles foe Shredder, and now, "baby sharks."  Like superheroes as a class, such forearmed characters may allude to narcissism, which seems increasingly common, even adaptive.  (If Americans dislike narcissists, why elect them president?)
Larry Cohen died in March, aged 82.  In assembling an impressive (if spotty) body of work, he had the disarming knack for seeming less subversive than he was.  He's been deceptively influential, witness the Cohenesque likes of Gremlins, They Live, The Addiction, even Velvet Buzzsaw.  He also pioneered movie franchising, in devising Return of the Magnificent Seven, Hell Up in Harlem (sequel to his Black Caesar), and the Maniac Cop series. 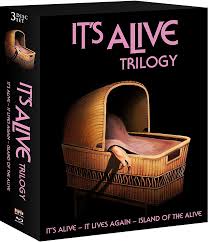 Like those films, the It's Alive trilogy helped validate small-budget, self-referential sequels, like the “dead” series of George Romero and Sam Raimi.  In having scientists study the mutants, the sequels are comparable to Children of the Damned, Day of the Dead and Terminator Salvation.  Finally, as in various franchises, notably the contemporaneous Planet of the Apes cycle, we're shown key engagements in what may be a global revolution.

Posted by Thomas Lalli Foster at 12:25 PM No comments: