everything has a reason: lensing Apocalypse Now in the Phillipines

The good thing about a compulsion: there's always next time to get it wrong right.

The Vietnam War was eerily similar to U.S. wars in Afghanistan and Iraq: a quagmire in a far off, developing, non-white nation, sold with lies and testosterone.  The major difference was (is) the military draft.  The calling-up of 2 million men to serve in Vietnam inspired mass protests during the war, and thereafter, survivor's guilt.  The guilt, in turn, fed the war on terrorism, initiated by non-combatants George W. Bush and Dick Cheney.

The survivor's-guilt boom left traces in our movies.  Initially, Vietnam vets on-screen tended anti-social and/or violent (e.g. The Enforcer, Black Sunday, Lethal Weapon, The Indian Runner).  The scapegoating didn't take, not for lack of trying, but Vietnam was a national disgrace that couldn't be shunted to a subset. 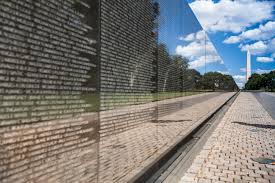 We embraced veterans in the mid-1980s: the Vietnam Veterans Memorial (right; opened 1982), Platoon (1985, by veteran Oliver Stone), Hamburger Hill and Full Metal Jacket (both 1987), and on TV, Tour of Duty and China Beach.  The debt settled, on-screen vets turned comfortably cartoonish, whether frankly (The Big Lebowski) or not (Forrest Gump).

The signal year, though, was 1978.  That cycle played it both ways, with sympathetic soldiers or vets nevertheless defined by mental and physical breakdown.  The Deer Hunter won Best Picture, and Coming Home, Oscars for Jon Voight and Jane Fonda, but Apocalypse Now may have aged best.  It inspired a celebrated documentary (1991's Hearts of Darkness: A Filmmaker's Apocalypse, by Eleanor Coppola), as well as a substantially longer director's cut in 2001.

As Hearts of Darkness documents, survivor's guilt informs even the publicity around a Vietnam film.  The filmmaking-as-combat conceit was mocked in 2008's Tropic Thunder.  Still, Apocalypse Now came oddly close: the planned 16-week shoot lasted over a year, the obstacles including a typhoon, Martin Sheen's (near-fatal) heart attack, and the Filipino government's repossession of helicopters and pilots (to fight a communist rebellion).  As in Vietnam, there was drugs and alcohol.  Armchair doomsayers decried the ballooning project, its commander due for a fall (Coppola was coming off the Godfather films and The Conversation).

These troubles were largely predictable.  Various locales can double for Vietnam; the troubled Philippines was the director's choice.  In Hearts of Darkness, George Lucas recalls warning friend Francis:


If you go over there as a big Hollywood production, they're gonna kill you.  The longer you stay, the more in danger you are of getting sucked into the swamp.

Excise "Hollywood," and these words apply to the Vietnam War.  But maybe that's the point: epic-film production as masochism, to exorcise survivor's guilt.  If such motivation was (largely) unconscious, it didn't stop Coppola capitalizing once the film was done.  The ringmaster's immortal words at Cannes, 1979:


My film is not a movie.  My film is not about Vietnam.  It is Vietnam.  It's what it was really like ... the way we made it was much like the Americans were in Vietnam.  We were in the jungle -- there were too many of us -- we had access to too much money, too much equipment -- and little by little, we went insane.

It's not just the movie's director, star and co-writer John Milius (reputedly blacklisted after his militaristic Red Dawn, 1984): various figures would receive displaced punishment.  Newspaper heiress Patty Hearst spent a year as a domestic terrorist, then 22 months in prison.  CBS and Mike Wallace were sued by General William Westmoreland; years later, Dan Rather was baited with fake documents.  Bill Clinton was impeached; Colin Powell, recruited for deception.  Others caught hell for exaggerating their service (Tim Johnson, Richard Blumenthal).  Jane Fonda got off easy: an apology, and penitential aerobics.

As voters, we avoided a vet as president (John Kerry, John McCain).  As ticket buyers too, we'd  avoid triggers: males of draft-age became stars only in their mid-30s (examples include Ed Harris, Samuel L. Jackson, Tommy Lee Jones, Patrick Swayze and James Woods).  Other than Oliver Stone, the most prominent (real) veteran in Hollywood seems to be Dennis Franz (NYPD Blue).

If Francis Ford Coppola wanted to show appreciation to veterans, he could have merely talked to them, and, perhaps, arranged film-industry internships.  Americans aren't particularly known for restraint or self-awareness.  If so, we might've avoided the quagmire of 2032.

Posted by Thomas Lalli Foster at 7:10 AM No comments: